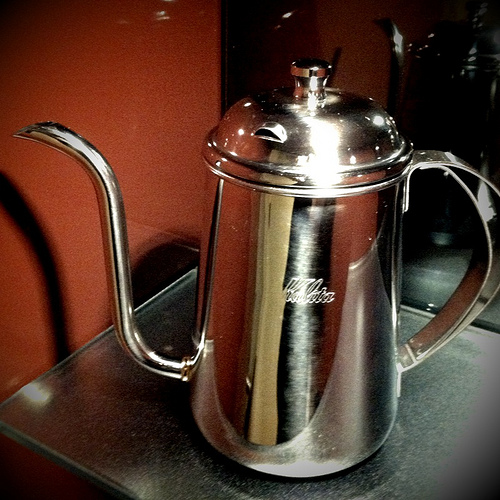 My quest for the ultimate travel coffee setup I am a coffee snob. I offer no apologies for this. I really appreciate good coffee, and have zero tolerance for crappy coffee.

I also travel a lot. So when when traveling to places that don’t tend to have great coffee at the ready, I’ve learned that bringing your own brewing setup is mandatory. Combine that with some strong technomadic leanings and the search for that ultimate travel coffee setup can become an obsession.

A recent trip to Japan, a place where designers and engineers are even more detail-focused than I am, provided an opportunity to refine my toolkit. I thought I’d share those improvements with you here, in case you’re looking to build your own kit for on-the-go-get-up-and-go.

First, two details. When given the opportunity, I tend to drink espresso. Truly great espresso requires the sort of serious gear I have no intention of dragging around the globe with me. (yes I know about the Aeropress, I’m just not a big fan) So when traveling, I default to drip coffee and focus on the details to make each cup better than the last. Also, I want to note that the setup I’ve been using is bad ass and made many cups that shocked me with their sheer deliciousness. There’s nothing wrong with the stuff I had, and you could just copy my old set up and never be disappointed. But I’m obsessed: I believe that all things, particularly coffee, can always be tweaked and improved.

Let’s get the non-gear out of the way first, because it doesn’t matter what kind of equipment you have if your raw materials are crap. Water and beans. I always buy a bottle of spring water to use as the base because ceiling cat only knows what weird shit is floating around in hotel plumbing that could imbue your cup o’ joe with weird flavors. Also, one of the last things I do before leaving town is buy a bag of high quality beans that were roasted as recently as possible. Keep in mind that coffee tastes the best when the beans were roasted between 3-10 days prior. For this particular trip I’ve been enjoying Los Inmortales, El Salvador: Finca Bosque Lya and Itzamna, Guatemala: La Maravilla both roasted up by the folks at Intelligentsia in Los Angeles. Now that we’ve gotten that out of the way, let’s talk grinders. If you know coffee, you know the single most important piece of prep equipment is the grinder. No matter how good your beans are, screw up the grind and there is nothing you can do to save it. You can easily spend hundreds or thousands of dollars on a good home grinder, but in addition to being pricey those are generally too large for carry-on luggage.

Oh, what’s that you say? You have a really small blade grinder that you got at Target? GTFO. You need a burr grinder if you actually want your coffee to taste good. Because different countries have different power sources that become annoying to worry about, a hand grinder is your best bet. For most of this year I’ve been using the Hario Skerton

which is a very nice grinder for what it is, though it does have some problems. The bottom burr “floats,” which means that especially when grinding at a coarser setting (like you’d do for drip coffee) the consistency is really bad. An inconsistent grind means the finer bits are over extracted and the larger ones under extracted which results in an inferior cup of coffee. Luckily there are other options. Unluckily, they are super hard to get a hold of. Legend has it that Hario makes an even smaller hand grinder that addresses the floating burr problem. I’d never seen on of these in person as they are almost impossible to find in the United States. My friend Tonx revealed to me that he had one locked up in some in some crazy coffee fortress in mid-city Los Angeles and after hours of jedi-mind-tricking I convinced him to let me borrow it for this trip to try it out. And then, at the eleventh hour, as if fate itself wanted to kick me square in the beans, it pops up on Amazon. I spent a week in Singapore with the Mini Mill Slim

and it’s noticeably better than it’s larger brother. I fell in love and swore to myself that since I was also going to Japan (where Hario is based) I’d go right to the source and buy one while I was there. Again, the Hario Mini Mill is awesome. Super awesome. But without question the Porlex hand grinder is even super awesomer. When I saw this on the shelf at Tokyu Hands I didn’t know what it was but instantly had an object-design orgasm. Upon further inspection I found that reaction to be justified. The attention to detail on this is unstoppable. Every piece fits just perfectly which means when assembled it feels solid (the Harios tend to feel wobbly). Functionally, it’s a significant improvement: the ceramic burrs are sharper and the adjustments more precise. The Hario Mini Mill produced grinds that were far more consistent than the Skerton, but still kind of variable. The grinds that come from the Porlex are extremely consistent; I’d say even better than many electric grinders in the $100 range. These grinds are nice. No question about it. The Porlex is slightly taller than the Mini Mill Slim, but it’s more narrow and just as easy to pack. I’m pretty excited about that upgrade. If you want one, let me know before I leave Japan and I’ll pick you up one, but I gotta warn you my service fee is obscene. Now that we have freshly-ground beans, we gotta brew ’em. Earlier this year I was carrying around the Clever Coffee Maker, an interesting design that blends pour-over with immersion (think French Press) brewing techniques. It’s really nice, but not terribly small. Also, I found myself wanting more control over the brewing process.

I switched to a Hario V60

which is a pure pour-over device. Once you figure out its nuances, this thing makes a damn good cup of coffee. I feel like I now have the hang of it, and became very satisfied with the results I was getting every day from it— maybe this is as good as it gets, I thought.

That is… until I saw the “crystal” (plastic) version. I’d been using the ceramic one: nice, but heavy. For traveling around, if I can shave off a few onces every once and a while I’m pretty happy. These were also cheap as hell so I picked up the 1 and 2 cup sizes for when I’m traveling solo or with the fam. While these improvements range from awesome to nice, this next one is firmly in the land of dreams come true. A few months ago I publicly lamented the lack of a good travel sized drip kettle. If you are unfamiliar with drip kettles, they have a long, narrow spout which allows you to control the speed and flow of the water you are pouring to make sure you wet the grounds in the proper way, and to repeat that easily each time. Yes I know it’s super nerdy, but you’re reading a super nerdy blog post about super nerdy coffee gadget obsessions. Anyway, the kettles I knew about were large and not suitcase-friendly.

And then I spotted this… I can divide my life into the time before and after I knew that this Kalita slow pour kettle existed. My internal debate about purchasing it lasted seconds. It’s about half the size of the smallest kettle I’ve seen and it looks beautiful.

I tried it out the second I got back to the hotel room and it was everything I hoped it would be. It’s not as narrow as the sketch I’d used as a wishlist months prior, but it’s damn close and seriously does the trick. I’m definitely psyched about this one.

One thing I didn’t have to upgrade is my scale. For repeatability and general super-nerdness I’ve been measuring the beans and water I use by weight rather than volume for quite some time. If you want to get really precise it’s really your only option. And the Soehnle Page digital scale

is a super small and lightweight way to do that. This thing is 8″x5″ and takes up almost no room in my luggage. And it’s great for showing off to friends when you make them coffee on the road. The downside to finding all this awesome stuff is now I have double the load to bring back with me. Though I’ll have some pretty happy friends when I get home and start dishing out the hand-me-downs.

I am a minimalist: I have no reason to keep the old stuff around. Awesome though it may all be, I only need one complete setup that works for me. No point in having items that duplicate functions sitting around, particularly when I know people who could benefit from putting those extra items to regular use.

In the end, my new setup is lighter, smaller, and produces better results.